Back in March 2009 the Hospital Costa del Sol was one of the most visited pages on Gomarbella. Most visitors were medical staff from the middle and far east and were writing to Gomarbella to check on the local Costa del Sol hospital in response to a scam involving false job offers. The hospital had received so many enquiries that the personnel department stopped responding to emails.

A so called Doctor Luis Xavier was offering would be employees fantastic contracts to relocate to Spain to the Costa del Sol hospital and for the sum of 800 euros paid in advance would process all the necessary paperwork.

I responded personally to about 50 medical staff who had written to me from outside Spain to assure them that the whole thing was a complete scam. Quite a few near victims wrote back to thank me and to say that they had been on the point of giving up their present jobs and moving to Spain!

Update: 15/08/2010 There’s a big new wing being built right now coming out from the left of the building above.

I kept in touch with the personnel department at the hospital about the fraudulent job offers and even contacted the editor of the English edition of the Sur in English newspaper to spread the story more widely but there wasn’t much interest in the story.

The big regional Costa del Sol hospital just down the road from the Gomarbella offices where I go now and again to be tuned up is spotless and appears to be very well staffed and maintained. There is a big building extension programme underway right now just where the car park in the picture is.

If you are planning to move to Spain to work in the state medical system, remember that you will need to speak Spanish! 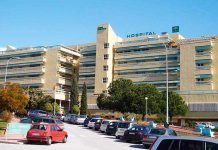