The 28th of February every year is a holiday throughout Malaga, Cadiz, Huelva, Seville, Cordoba, Almeria and Granada to celebrate Día de Andalucía. The eight provinces which make up the autonomous region in the south of Spain known as Andalucía were given recognition of their historical identity and right to self government in a referendum on the 28 February 1980.

Information in Spain is unusually factual and so I have to tell you that Andalucía has a total population of 7.849.799 persons. You might also like to know that men have an average life expectancy of 75 and that of women is 82. There are 9 state universities, 2 304 kms of highways and national roads and 4 international airports. (I am not sure why the women live longer than the men given the amount of time the men spend sitting in bars or parks whilst the good women work at home.)

Rather than spend a quiet day at home reflecting on 25 years of self government, the whole of Andalucía was out celebrating. Actually down here we celebrate any holiday that comes up. This is a part of Europe where a gathering of people, food and drink add up to a party. It can take a northern European years to understand the spontaneity of a celebration in the south of Spain.

Today was no different, a glorious sunny day on the Costa del Sol, the beach restaurants were packed. The chiringuito we were going to for lunch was full so rather than wait we walked along the edge of the sea for about 200metres to the next one and after a few minutes were shown to a table inside.

Sitting at the other tables on the beachside terrace were both foreigners and Spanish tucking into paellas, fried fish washed down with cold beers and wine. The fish was fresh, fried calamares, prawns in hot garlic oil, monkfish, salads and cold drinks. It was good to be together and the weather was glorious, just like early May and definitely not what you would expect of the last day in February.

Strolling back on the beach at around 4.30pm, there was no one actually braving the cold Mediterranean sea but plenty of folk were still in their bikinis and costumes soaking up the last warm rays of the 25th Día de Andalucía. 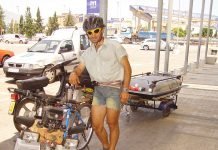 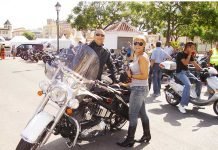 HOGS on the Costa del Sol