Juggling a jacket, car keys, watch, laptop, loose change and a belt and showing a boarding card all at the same time at the airport security scanner is about the hardest part of the Easyjet flights from Malaga airport.

London’s big draw is our 13 month old grandson Sam whose bedtime lullaby includes thanks for all that we have and enjoy. Whenever I take over this happy routine be it here in London or back home in Marbella, I always include a little song of praise for Easyjet for making it possible for us all to be together so often.

Before leaving yesterday on this trip I checked into my Easyjet online account and for €7.50 one way added an extra piece of hold luggage. It was a bookshelf which I had made for Sam. Sure enough it showed up on the screen at check-in. With a big “Fragile” sticker on it, we were through in record time.

Back at the beginning of 80s, well before the internet, the words “cheap flights” didn’t exist in the vocabulary of travel agents in Spain. Not many of us on the coast at that time had much money either so we worked out our own way of getting low cost flights to London. Needless to say it fitted in very well with the easygoing lifestyle on the Coast.

We would go down to Palms Beach Bar in the Marbella Puerto Deportivo. “Got any good tickets to London for me John?” Looking up at a row of charter airline tickets clipped to a line behind the bar with clothes pegs, John would check available dates. “Here’s one for a male passenger leaving this Friday. The guy wants 5000 pesetas for it.”

What we were actually buying was the return leg of someone else’s ticket to the UK. The charter airlines had to sell return tickets originating in Britain and a charter ticket was the cheapest way for holiday makers to get out to Spain. It often happened that travellers would fall in love with the Coast and simply decide not to go back home. To try to get some money back on the return flight they would leave the unused return ticket at the local English bar for a quick sale.

You have to remember that this was 20 years before 9/11. In those days at check-in you just showed your ticket. At immigration you just showed your passport. As long as you travelled on a ticket which corresponded to your gender you would board. It was Monarch Airlines who led the way in notching up security by introducing periodic checks at check-in to see if names on both ticket and passport corresponded.

A careful traveller I preferred to pay the extra 1.000 pesetas, about 6 euros now, for the original ticket holder to come with me to Málaga airport. He would check himself and my suitcase in, showing his passport which of course corresponded to the name on his ticket. Huddling to one side he would then hand me the boarding card in his name, I would press cash into his hand, take the boarding card from him and go through passport control where they would look only at my passport.

Coming home meant a scan of the Daily Mail last minute travel ads followed by a same day visit to a Soho based London bucket seat flight operator. With a round ticket in my name I would fly home ready to face any pre-flight spot checks. No sooner home I would pop down to Palms and John would peg my ticket up on the line to sell to some other needy traveller. A Mediterranean beachside bar is always seductive and a couple of ice cold San Miguel beers to complete the deal were as much a pleasure then as they are now.

The snows in England last night meant a 2am last plane landing at Gatwick. As we trudged silently along deserted walkways in the South Terminal building towards passport control I caught a glimpse of our Easyjet plane out on the frozen runway. It had brought us yet again safely to London.

Waiting for the first 3.05am train out of Gatwick to Victoria I thought about the two hours of sleep that we might get before Sam woke to find us. I decided that I did actually prefer the brilliant splash of orange along the side of the Easyjet planes and its internet booking system to choosing an airline ticket off a clothes line. 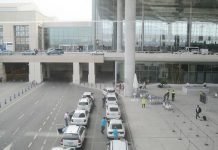 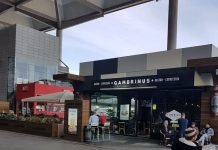