We came across the little Coria del Rio ferry which crosses the 300 metre wide Guadalquivir River quite by chance.  Well not exactly by chance. We were trying to find a bike route from Seville down to Tarifa in Cádiz in the south. On our way back from the Algarve last month we checked out this bank of the Guadalquivir.  It was just like stepping back into the past. A Spain that you wouldn’t imagine still exists. When my wife and I pulled up in the shade of the big riverside trees we could not believe what we were seeing.  With forty years behind me since I first arrived in Spain. I felt enormously relieved that the ‘old’ Spain still exists. It’s certainly worth looking for.

The Guadalquivir River connects the Atlantic ocean with Seville city. It’s completely navigable by large container ships right up to Seville Port.  Our ferry across to Seville’s riverside commuter town Coria del Rio which you can see on the other side is just 3 kilometres downstream from the enormous five lane Puente de Centenario Bridge built for Spain’s 1992 Expo. The car laden boat certainly does not seem to have been modernised in any way since then.

In the morning workers use the Coria del Rio ferry to cross from the towns on the west side of the Guadalquivir to the farms and industrial estates on the other side. This saves them nearly 30 kilometres and they also avoid the overcrowded  SE30 ring road around Seville.  I chatted to a motorcyclist waiting to cross. He does the trip twice every day. On a Friday he stops on the way home at the little bar on bank of the river.  He pays €2 for his motorbike and told me it would be cheaper if I came back on a bicycle.  I counted 11 cars loading onto the boat and watched it cross the Guadalquivir steering upstream to counteract the strong flow and the curving back to the disembarking point.

We were tempted to stop at the little bar under the big shady riverside trees but it was getting late so we made our way back to the main road south to the Costa del Sol.  Next time we come back from the Algarve we’ll definitely try the Coria del Rio ferry crossing from the other bank.  And we’ll stop at that little shady riverside bar for a cool drink.   Here’s the address if you’d like to give it a go:  Transbordador de Coría del Rio, Paseo Martinez de León s/n, Seville. You can also take the metro from Seville centre to the San Juan Bajo stop and then catch a connecting bus to Coria del Rio.  Please send me a picture of your voyage!

Flamenco at the Fuengirola Feria 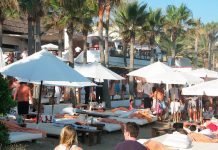